I was wondering about what was everyone’s first post because I do see alot of ban appeals and the appeal is usually their first post. I really would like to see what was my first post by looking at my profile and other people for that matter too. I don’t know if this is possible but I would really appreciate it.

Here’s mine… I was so young, and dumb…

Well, Hello everyone, if you dont know me, i go by John, i have been playing on the creative mode for a long time, and have been ranked to an adv. builder.
I have been a moderator on [glow=red,2,300]GnomelandSecurity[/glow], no longer available, and am shooting to be an OP. 8) I have been on this server for a long time, but didnt really pay attention to the site. But, since i have started wanting this, I am going to be online as much as possible.

This is your oldest post… Seems wierd for a first though…

I get that reineii is the sort of person that pushes peoples buttons. We need to learn to live with these people it is a sign of maturity if you can. Reineii is my friend and an excellent person. I understand she starts drama on the server but that makes it real. Without said drama minecraft wouldn’t last a day it is a normal human thing to do. I really wish the staff would please reconsider this think as adults and you see you need to learn to live with people like her or you will never grow up.

Thank you for your time

Hey everyone in PCB land, I am liam599, as you might have guessed from the name on this post, but anyhoo, just making a post to say i have joined the forums!
For any of you who haven’t met me yet, i have been on the server for about 5 days, am an adv builder, and i have made the following:
In guest city:
The 599 Pub
The hotel with the green L on it
the building site with the yellow crane
The NES Controller

Flatgrass:
The Fortress connected to the nuclear missile silo (if you can find out which one is connected >:D)
The disco place with the greendoor flashing floor
and anything else which has a big green L on it

Poptown2:
The guitar on the wall.

That’s all for now i think, i hope to get to know more people, and continue building big projects in PCB!!

You can already do this. Go to your profile, then click on ‘show posts’ and just go to the last page.

Ohai everyone, I’m on the forums now.

For those who don’t know me I’m an adv builder on the server (thanks Fatso, Liam and Joe).
I have built some stuff on guestcity including the church with the BIG gold cross and in flatgrass the rave room (with help from liam) and the creeper. Also on public, the house over the water.

Don’t even ask about the name thing at the end…

I’ve started playing here for about a week on Survival, so I decided to come here to introduce myself!

My name on Minecraft is SpllatPT (probably some of you have seen me on the server) and i live on Portugal, so sorry for my poor english!

I hope we can spend some great time playing together!

Don’t even ask about the name thing at the end…

[move]This forum software is so old it uses the tag, which was deprecated in 2008. Every time you use a marquee, the guy who makes Will it Blend? buys another puppy[/move]

My first post was a ban appeal. Meta banned me haha I broke into the white house

how long did it take yall to find those xD

how long did it take yall to find those xD

About 30 seconds, do what Ouhai said.

Congratulations Spllat! And your English was perfect!

HI everyone! I am koalamama and I have been on this server for a while now. I like koalas and… I like the color pink, xD

‘just signed up to the website; let me know if i can help with anything’

My first post was a ban appeal, when a hacker banned me when he hacked the server back in September of 2013 when I forgot the server had a forum page. 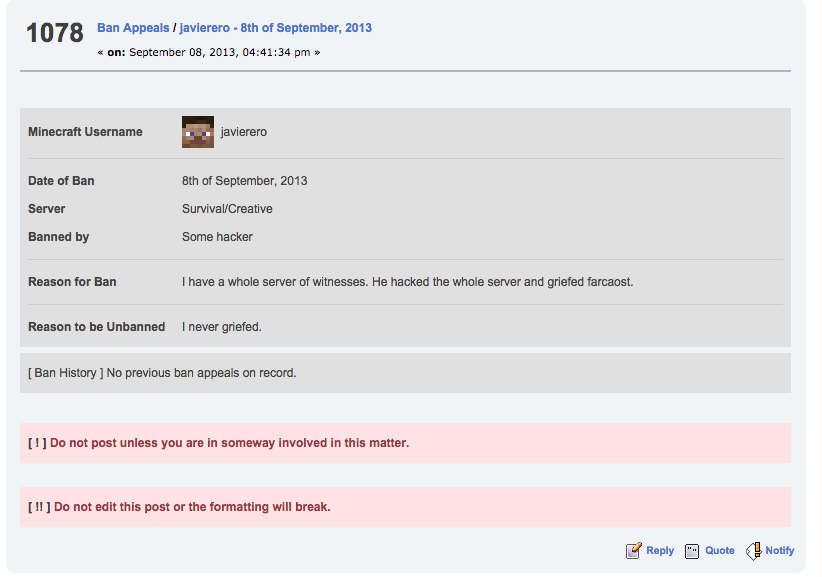 [size=14pt]As if! This was my very first post XD

Hi Everybody! A few months ago, I started a project in (Creative2) called the PCB Subway. After much planning and building, I have decided to open up the Subway for anybody to ride in!

The PCB Subway Links small towns and big cities together including Raymont, Acra City and Verona!

Below shows a Network Map of the PCB Subway and it’s development. This map will be updated regularly.

Here is a current map:

I would like to say a big Thank you to everyone who helped out with construction of the PCB Subway whether it was digging tunnels, making shops or decorating corridors and platforms! I will update this post so you can keep a track on the progress of the PCB Subway! Also feel free to visit the PCB Information/Ticket Center located in Ashwick Mall.

I’m glad that everybody has taken to showing their first post it is fun to see all of these in a central location it is also strange that some prominent members of the staff have ban appeals for their first post.
;D

This railroad is in Creative, so no, we probably won't hit Wildefay ;D And no matter how cool a railroad may ever be, warps will always be faster, but there's no reason why we can't have both.