The Highway On the Ocean.

As we all know, the 1.15 creative world is Vanilla generation. One perk of this a lot value, is the one ocean we have available. Something the ocean is great for is boats and the idea that our cities are unified by boats. Additionally the ocean is great for Sci-Fi like cities that adapt to the ocean environment. According to these ideas, the ocean acts as a connection for player’s cities. So therefore a dividing line would be harmful to this widespread idea, of the ocean being a connection between cities. As of this writing many logged on to be met with a highway being constructed straight down the middle of the ocean. Currently it floats at 777 blocks long, heading northbound and southbound. Its location is -3050, 100, -9200. It seems the goal of the individual is, to connect two points about 1000 or 1200 blocks away from each other. 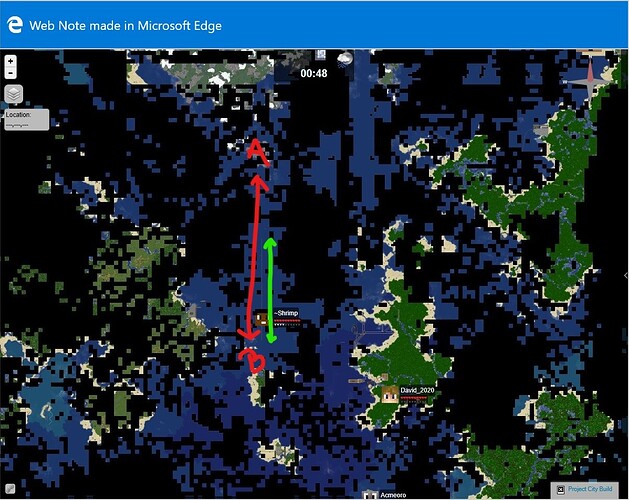 Annotation 2020-04-12 1154001200×953 259 KB
The reason I bring this up is, a highway like this in my own opinion lowers the quality of the map because the ocean is an important component of the overall quality of CMP. The question I raise however, is should something like this be allowed? Should staff be required to approve projects such as something like this, which could be considered massive land claiming, and depreciation of the map? I know previously a case of a 9000 block long highway did inhibit staff intervention. If everyone decided to make highways over the ocean, it would look like anarchy and unorganized. And with the general idea of every new reset being to improve. I see this as an opportunity to set a standard for what map quality should be. I.e what is looked down upon and what is looked up to. What do you think?
1 Like
ShibanuTwo 12 April 2020 19:04 #2

Personally, with something cleaving an ocean in half, I’d only approve it if it’s a large grand realistic bridge spanning the ocean, like so:

But yes i think consulting before doing huge projects that can potentially cut up the map is a good idea.

Absolutely agree with this Shrimp, I think before we carry on ambitious projects like building a highway, we should consult Staff, and perhaps the community as well. I also agree with you Kyle, we should at least spiffy it up with a bridge or something if one wants to make a highway to a certain place.

Personally I am heavily against this. Leave the Oceans as they are. After all, many people wanted large undisturbed oceans and we have received them. Why interfere with them?

Thank you for addressing this, Shrimp. I’m thankful you brought it up here after me mentioning it. :>

Gonna have to agree with Will on here, unless you somehow make it look legit, it’s just gonna look like a worldedit mess.

Looking legit = Having properly done underbody throughout the bridge span, realistic bridge to begin with, etc. At least try to have it be 3 lanes minimum on each side with proper shoulders, tired of people throwing up COMPLETELY straight highways that go on for over 500 blocks with no interesting curves or landmarks that noone appreciates.

I would like to personally apologize to everyone for making this selfish mistake and would like to tell all of you that it has been removed.

There’s absolutely no reason for a 777 meter-long bridge to connect two points of land four days after launching the 1.15 creative world. This is a ludicrous claim on the world that hinders the cooperation players have with each other in the region. The sole purpose of bridges is to connect two locations of significance, and these present locations currently have no significance to the community whatsoever. Until there’s a need for locations, preferably those with warps, to have a connection over water, bridges claiming a large swath of territory is wholly unnecessary, ill advised, and places a disadvantage to the rest of the community.

It looks like this discussion has been solved, as swordsman_dood has apologized and removed his bridge due to the complaints. I am going to therefore lock the discussion as the point has been made clear. Thanks