Comedian and actor Robin Williams has been found dead at the age of 63, believed to be suicide.

I hate to be the morbid one here, but if you are going through some hard times, don’t hesitate to speak out to someone, be it a family member, a friend or even an online friend.

Likewise, if you suspect someone you know to be going through difficulties try to help them. Either speak to them personally or if you wouldn’t feel comfortable, let someone else know.

It’s a corny saying, but it’s true. Suicide is a permanent solution to a temporary problem. As far as we know, there’s nothing after death.

Yeah, I’m not the best at writing this stuff.

This was a very sad thing indeed but death is a thing that will happen to every one as sad as this is. But if we know that we are going to heaven when we die than we can be happy that the person who died is in a better place, so when we die we all want to make sure that we go to heaven not only for our sake but other peoples.

As far as we know, there’s nothing after death.

I am sorry this is not true we do know there is somewhere we go when we die. Do you know where you are going?

If you do not know I plead that you talk to me.

I know that “afterlife” or lack thereof is a sensitive subject and I would ask that we avoid such a topic here. On the current topic I was super surprised to hear this. As Zesty stated, if you have depression talk. Let it out. Holding it in only hurts.

Usually I’m not this open on this server but Holding in emotions and how you feel is probably the worst thing ever. I myself battled quite a bit of a depression stage during my 9th and 10th grade year of highschool. Hiding all your feelings as if your feelings really don’t matter. As if it’s all irrelevant during highschool. Those anxiety and emotional nights you get when it’s late. It’s hard to describe the feeling but it’s almost a feeling of emptiness. I have lots of friends and best friends and all but still felt empty. Still feel it a bit today. This year I tried to open up more to people for my better self. Holding it in doesn’t make it better. Please talk to someone if you feel this way guys, it will make it better before it’s too late. Sometimes depression isn’t some “phase,” sometimes it can get the best of people.

May robin rest in peace. He was a good one.

I just found out about this at work and it really saddened me.

For all the creations this man has shown me. I grew up seeing his films. So many of them touched me. Alladin, Jumanji, Bicentennial Man, and What Dreams May Come are my favorites.

In particular, What Dreams May Come showed me a version of life after death that I really wish were true. No religion involved, just a system that worked. Reincarnation makes so much more sense to me than eternal happiness in heaven, or eternity in hell.

What Dreams May Come was fantastic.

True Mania now lies on Jim Carrey’s shoulders. Robin Williams was the person who made me want to be a Voice Actor though. I’m truely saddened my children will never get to see a new movie from the man.

I watched Dead Poet Society at school last year. Really good film, well-done, and was one of those you don’t really lose your interest in before it’s over. I definitely enjoyed it.

I am sorry this is not true we do know there is somewhere we go when we die. Do you know where you are going?

If you do not know I plead that you talk to me.

Apologies if I have offended you, but we all have different beliefs.

I was really shocked by how sudden his death was, last week I watched Jumani and it’s so odd to think that he’s just gone I don’t think it’s going to sink in until about a year or so :S

With the little time I have, I’ve quickly created a drawing of him :’(
Rest in peace Robin Williams 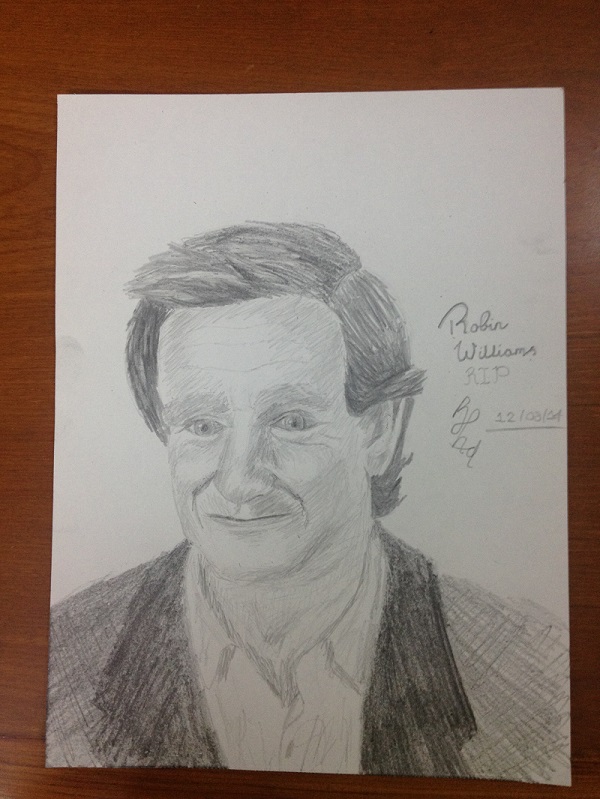 we will miss you, oh captain my captain :’(

O god I remember laughing my ass off at Aladdin, definitely was a fav of mine as a kid.

It’s sad to know that the man who brought happiness to others couldn’t find happiness for himself. But at least his movies will still live on to bring joy to those for years and years to come.

Such a great actor who stared in so many things from serious to comdy. Its so strange how someone loved by so many can suffer from depression.