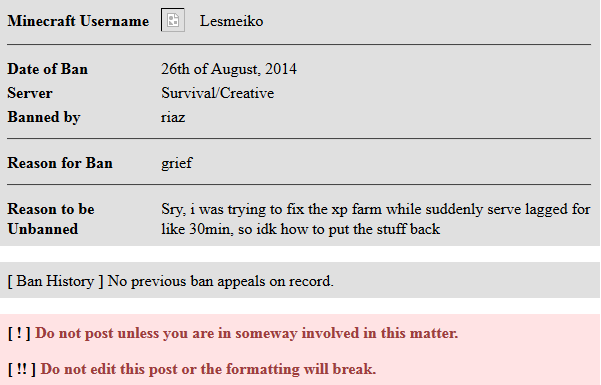 Sry, im a newb, is there a second chnace…plz?

Why would breaking and placing random blocks fix an xp farm in anyway? Personally I don’t think you deserve a second chance

I have seen les and he seemed like a good player from what I saw. Personally I would give him a second chance but its up to you Riiza

Grief is grief. It doesn’t really matter what sort of impression they leave on you, Anth.

well, he grief my xp farm, I had already warned him once and he did it again!

I think that everyone should respect others people builds but in my opinion lets close our eyes by this “second” time and see if he starts behaving better!

Reading your comments I have come to the decision to unban him and give him a second chance.