I know the video is long, but watch it anyway.

Joseph Kony is the leader of a military organisation in Central Africa. He abducts children. He forces them to kill their parents. He takes the girls and uses them as sex slaves. The boys go into his child army. They are forced to kill people and mutilate people’s faces.

Worst of all, this isnt just a few cases. This has happened to over 30,000 children in Central Africa, primarily Uganda. 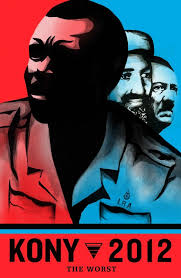 Watch the video, sign the petition, spread the word, get the pack mentioned at the end of the video, put posters up in school, all sorts. Hell, join in on April 20th after dark and help plaster Dublin or something. The main point is to get his name known by anyone and everyone you can.

Demented, sick, horrible, anything like this is how you would describe him. That’s just so sick what this guy is doing. I really hope this stops.

I wish i could get on youtube now to be able to see this.

This video is getting 1million views per hour at the moment o.O

I sent it to a load of well known youtube people, and most of my facebook. With the youtubers, it may not do anything, as they probably get so many messages. But its worth a try.

Gonna do everything I can to help. Which includes a sig change, thank you for the idea ouhai

I resized it on powerpoint but it did nothing.

Yeah I’ve seen this all over Facebook, and saw it on PhilipDefranco this morning. What this guy does is horrible and must be stopped. I’m sure if we spread the word the government will do something.

I know you’re will is good, but really, is there anything WE can do about this? When I say we I mean PCB.

form a band of rag-tag mercenaries and meet up outside one of their occupied lands.
I’m a pretty good shot with my Golden Boy

THIS JUST IN: 3 TEENAGERS OVERTHROW AN ENTIRE AFRICAN REGIME WITH STICKS AND STONES.

I’m totally going to help if I can. This guy is awful, and let’s show the world that with the power of the internet (and a little bit of magic) we can change the world!

Lol, was waiting to see this come up. I have a friend that is organizing 6 of the after dark things, and one in Philadelphia O.o.

There’s a Facebook page for it, I’ll find it sometime.

My friend started one in the large town next to mine. We have 45 members at the moment.

Bah I dont have any good friends. All mine are stupid… they cant even name the vice president :-\

I love that kid’s face when he said kony was invisible.
Can’t believe how this has been able to go on for so long.