You were involved in a large spamming attack a while back, which a player alerted me to yesterday. YoshiBoy13 also gave me some evidence that you are an alt of MasterPR, but I’m not sure about that.

You have 24 hours to respond.

I have no idea what happened with that attack because it happened in November, and I had never even been on the server until mid-December when I registered. If my account was involved in the attack then either somebody else was using it or it was a different account with the same name. I know that you’ll tell me my account is my responsibility, so to be safe I’ll change my password so no-one else can use my account.

If you could please explain to me what you mean that would be appreciated.

It was certainly your account, as only one account can have a username. A certain player has suspicions that you are are the same person as a banned player called masterpr, just using a different account. (although that was more of a side thing, you were actually banned for the spam thing)

Then somebody else was using my account when this player spam happened. I did not spam and I will change my password to make sure that no-one else is using my account. I really enjoy playing on this server and I have no intent of harming it at all.

As for this masterpr person, I have no idea as to who he is, but I can assure you that I am not an alt account for this player.

I also was told by YoshiBoy13 that he had “substantial evidence” that 2tone was an alt of MasterPr. Holding back on accusations, though.

@YoshiBoy13 , if you have any evidence could you put it here?

Would if I could, but sadly I go to school, and posting something anything about the real life details of any people who go to that school is liable to get me suspended, because some people on the server could possibly be kidnappers or rapists or so forth, and apparently even posting a singular name on a website could get someone murdered.
However there was an incident in where he /msg’d me my real name to get my attention, which was the final straw for me. However, according to the rules laid down by the school, my lips are forcibly sealed.

You could have said something like ‘I know MasterPr IRL, and 2tone msg’d me my real name, which only MasterPr knows on the server’

I’ve sent YoshiBoy13 the initials from 2tone’s email (D.C.), and suggested making people anonymous with fake names or whatever.

The name on my email address is David Carton, but the last name is fake.

So how did you know YoshiBoy’s real name? 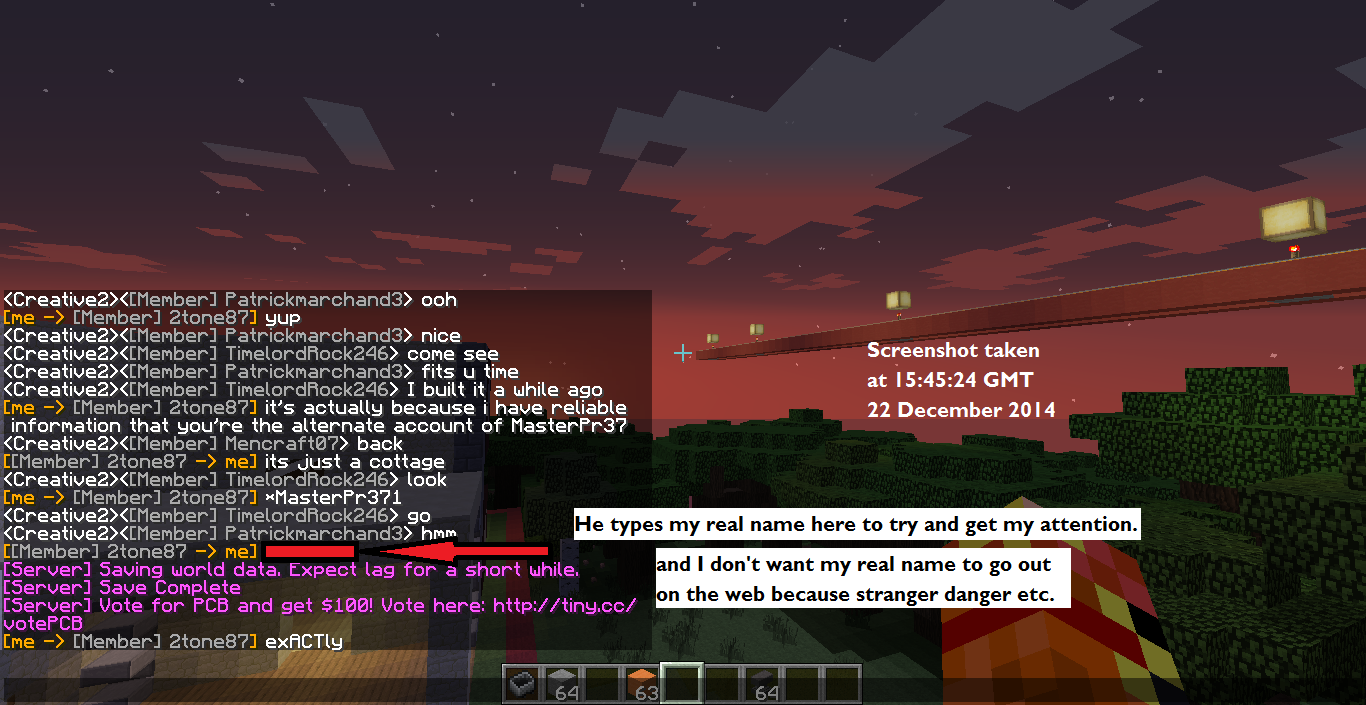 Basically, I know MasterPr IRL, and 2tone msg’d me my real name, which only MasterPr knows on the server

Except also vors01 knows it, but he’s a friend and also not banned, so he’d have no reason to use an alt which MasterPr IRL admitted to using.

I saw him posting the ban appeal from his smartphone just before 9am this morning, if that helps.

I’m not this masterpr guy you keep talking about, I seriously know nothing about him (other than the fact he has been banned 10 times). Give me a way to prove it to you! I’m just a simple player on the server who just wants to build.

Yoshis story checks out. The appeal was posted from an Orange Mobile phone, but the replies have been from a different IP.

Any closing words before I deny this?

I did it from my phone because I was in school and didn’t have access to a computer. Yoshi did not see me make the ban appeal. Come on, I didn’t even do anything.

You claimed to not know who masterpr was, yet you did, hiding something?
Yoshis evidence matches up with what happened.
You live near to tosh I and masterpr.

Masterpr admitted to using an alt, and out of some huge coincidence you turn up, checking all the boxes.

Locked. Not being unbanned.

Also FYI: this detective work was a lot of fun, so any new player from the south of England will be closely examined by me. I could do this all day.

Edit: everything just clicked. This is a public account from one of those pastebin lists. This account haas been banned from huge numbers of servers, just google it. Nice try!